In response to the increasing number of refugees, churches across Europe coordinated by CCME started Safe Passage. Click here for the information leaflet, or read the German leaflet.

In November 2014 Christian organisations published Recommendations for the development of safe and legal paths to protection in the European Union. Read more.

Here are a summary of some key concepts of the Safe Passage project:

Safe Passage: Advocating for a humane asylum and migration policy in Europe

Many churches have been expressing concern about the harsh realities of asylum and migration in Europe – the unacceptable deaths of many of those trying to come to Europe, the realities of poor reception conditions and destitution, widespread exploitation and the difficult circumstances for integration in equality, to name…Read more

The CCME Executive Committee took note of the current situation regarding refugee protection in Europe at its meeting in Timisoara /Romania 16-18 October 2015. During a conference organised by CCME member AIDROM in cooperation with the Romanian Orthodox Metropoly of Banat, the ExCom discussed how “European Churches (are) responding to….read more; Arabic; Greek

Bible Study by Most Revd Dr Kari Mäkinen, Archbishop of Finland and Turku at the Conference “Have No Fear”: The impact of the global refugee crisis in Europe and European churches’ responses (14-16 June 2016, Lunteren, Netherlands). The event was jointly organised by the World Council of Churches (WCC), the Conference of European Churches (CEC), the Churches’ Commission for Migrants in Europe (CCME) and the Protestant Church in the Netherlands (PKN).

‘Have no Fear’: A Statement

The World Council of Churches (WCC), the Conference of European Churches (CEC), the Churches’ Commission for Migrants in Europe (CCME) and the Protestant Church in the Netherlands (PKN), recognising a need among member-churches and ecumenical organisations to reflect on responses to the global refugee crisis, organised a conference in Lunteren between 14th and 16th June 2016. The conference brought together more than sixty representatives of…..read more; Dutch; Hungarian

Hotspots for Refugees: a CCME analysis
In short videos, Doris Peschke the General Secretary of CCME explains the current refugee crisis and what can be done. The videos were co-produced by WCC, CEC and CCME

Statement of CEC Governing Board: A Europe that protects and welcomes

Europe is entering yet another summer during which significant groups of refugees and migrants will be arriving at the borders and shores of European states. This is a particular challenge for southern European countries and those having already received large numbers of refugees. Conflicts in the Middle East and several African countries lead to…read full statement

A Europe of peace and hospitality 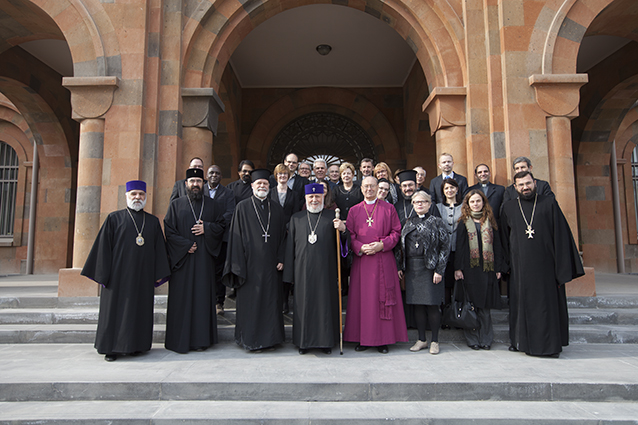 The Governing Board of the Conference of European Churches met from 25 to 27 November in Holy Etchmiadzin (Armenia) for its second regular meeting of 2015. The meeting was hosted by the Armenian Apostolic Church. The board was deeply moved by the fate of the Armenian people, who this year commemorate the centennial of the Armenian genocide. It was in this context that the Governing Board of the Conference noted with deep concern the growing refugee crisis and the…read more

In the wake of the current refugee crisis, European churches are being encouraged to deepen their efforts in receiving, supporting and protecting refugees who arrive in the region. This call was made in a letter issued jointly by the World Council of Churches (WCC), the Conference of European Churches (CEC) and the Churches’ Commission for Migrants in Europe (CCME). Please read the full text of the WCC-CEC-CCME joint letter on European refugee situation

Deaths at European Borders – there are alternatives

Deaths at European external borders can and must be ended, alternatives are available and need to be implemented. This message was highlighted by speakers and participants throughout the conference “Deaths at European Borders – there are alternatives” held in Rome 23-24 February 2015. Politicians and representatives of churches and non-governmental organisations talked about the need for a “toolbox”, because – as Stefan Keßler of the Jesuit Refugee Service Europe highlighted – “not one instrument fits all situations.”

“I am proud to be part of a government which initiated the Mare Nostrum Operation to rescue migrants in distress at sea”, Italian Vice Minister for….. read more; German Version; Conference Report

Together the Churches’ Commission for Migrants in Europe (CCME), the Conference of European Churches, and the World Council of Churches grieve the drowning of hundreds of migrants in the Mediterranean. As many as 700 people are feared dead following the capsizing of their vessel just outside Libyan waters. Rescue efforts are underway and so far 28 survivors ….read more

After the tragedies of Lampedusa and Malta in October 2013, the discussion on providing more safe and legal paths for persons in need of protection to enter the European Union has gained a new dynamic. Decision-makers from the entire political spectrum quickly joined Pope Francis and other representatives of religious communities in their call for solidarity with migrants and protection
seekers. Since then, however, the Commission-led ‘Task Force Mediterranean’ has not come up with….read more; Portuguese

One year after the tragedy off the shores of Lampedusa, persons across Europe remember the persons who have lost their lives in this and many other incidents in the Mediterranean Sea. The Churches’ Commission for Migrants in Europe takes this opportunity to call on churches, governments, European institutions and people across Europe for a commitment to prevent such catastrophes.
While more refugees and asylum applicants have come to….read more